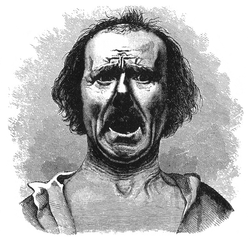 When a culture becomes inured to terror.

A police officer kneels on a man’s throat for nine minutes. The man pleads for his life. He dies.

A man walks into a gay bar in Orlando and murders 49 people with a legally-purchased assault rifle.

A boy shoots his mother, drives to an elementary school, and murders six adults and 20 children.

We have a name for this. Those with something to lose refer to it by innuendo. Those who wish to be accurate call it “terrorism.”

In the days that follow each instance of it, we respondin our own particular portrayals of grief – each role sickeningly familiar:

We post messages of sorrow and outrage to social media.

Many of those messages lead to arguments that lead nowhere.

Our leaders confess their heartache and frustration, while pundits and essayists ferret out what’s to blame.

One by one, our late-night funnymen (and woman!) added their newest statements of sorrow, bewilderment, outrage, and solidarity.

The NRA, sniffing blood in the air, responds with their standard position of moral cowardice and reptilian self-interest.

That death can be so near, so simple, so sudden and so terribly violent – that indeed is terrorism.

That we’ve become so accustomed to this, however, the slaughter of our neighbors, and that our systems of government have been either unable or unwilling to muster any substantive action against it… that, I propose, requires its own term.

I call it “horrorism.”

When I was in college, I had this really wonderful Gothic Lit professor. He was born for the role – lean and hollow-cheeked… gaunt… a morbid yet ultimately benevolent weirdo who looked effortlessly like Edgar Allan Poe. He lectured to the middle-distance, never once meeting his students eyes, and spoke in a dreamy, faraway croak. His office was a book-strewn crypt, bathed in amber light, in the basement of my campus’ oldest and most thoroughly begargoyled building.

Oh, and his surname was the Italian word for dark.

All of this is true.

I was probably 19 when I took his class. Which, I’m sorry to say, was quite a while ago. And while most of his lectures have faded over time… one lesson sticks with me: the difference between terror and horror.

Now to you or me, terror and horror are pretty interchangeable. Were there some distinction to be drawn, it’d surely be a tedious and pedantic one. We can swap those terms in conversation without any major derailment of understanding. For example: as a borderline arachnophobe, it doesn’t really matter what I call the feeling I have about, say, a spider crawling up my leg – the outcome remains the same: I will rip off my clothes and set the couch on fire.

But there is a distinction to be drawn. And while it might seem fusty and academic… I would argue it is essential.

This is it: Terror comes first.

Terror is fear in the future tense. It’s the anticipation of violence and death. In slasher movies, Terror is what you feel as a coed pads through a dark hallway… it’s the shred of the orchestra as she reaches for the blood-smeared doorknob.

Horror is what she sees once she opens the door. Terror comes first. Horror comes after. Horror is terror, realized. It is terror in its present tense. It’s what we’re left to live with once our fears have come to pass.

To paraphrase my Gothic Lit professor: Terror is the smell of a corpse in a dark room. Horror is what you see when you finally turn on the lights.

According to the Gun Violence Archive, as of September 13th, 2017, there have been 43,363 incidents (by which they refer to shootings).

253 of those incidents were classified as Mass Shootings.

I have not calculated the newest numbers into these figures. But the death count will most certainly rise. Probably in a day. Maybe in an hour. If you’re curious, here’s a link.

That gun violence of this magnitude can inflict itself on so many people without warning or reason – that it could happen to any one of us at any moment: that’s terror.

That even in the face of such unimaginable violence and sorrow – that this terror has become normalized by the feckless self-interest of our leaders, that we would rather fight about this online than see it changed in the world, that  billion dollar industries in this country thrive on the harm we cause one another, that millions of Americans would hold their desire to own a machine gun above another person’s right to not be murdered by one, that we could witness the murder of children and somehow be unmoved: that’s horror.

If we’re going to have to live with this as our new reality – I think it’s only fitting that we give it a name.

The fear of violence inflicted on us is terrorism.

But our inaction is a different kind of violence altogether.

Inaction is a violence we inflict upon ourselves.

It’s time we call it what it is.